„Less is more“ stands for the minimalism in architecture that was characteristic for Mies van der Rohe’s designs. Particularly his Barcelona Pavilion was style-defining for modern architecture – and still is today. Therefore, it also served as an inspiration for the project Linea Nera, the first project by Reimann Architecture, which was holistically based on the principle of building from the inside out and follows the guiding principle „less is more“. The open floor plan of the house allows visual axes between the interior and exterior. Following the example of van der Rohe, the reinforced concrete roof rests on chromed columns.

Wall elements such as enamelled glass sliding doors by Rimadesio and walls made of natural stone Ceppo di Gré do not form enclosed spaces. Rather, their use creates a flowing transition that enables spatial relationships and visual axes between inside and outside. This open floor plan creates areas that merge into one another with a function so that there are no unused traffic areas. 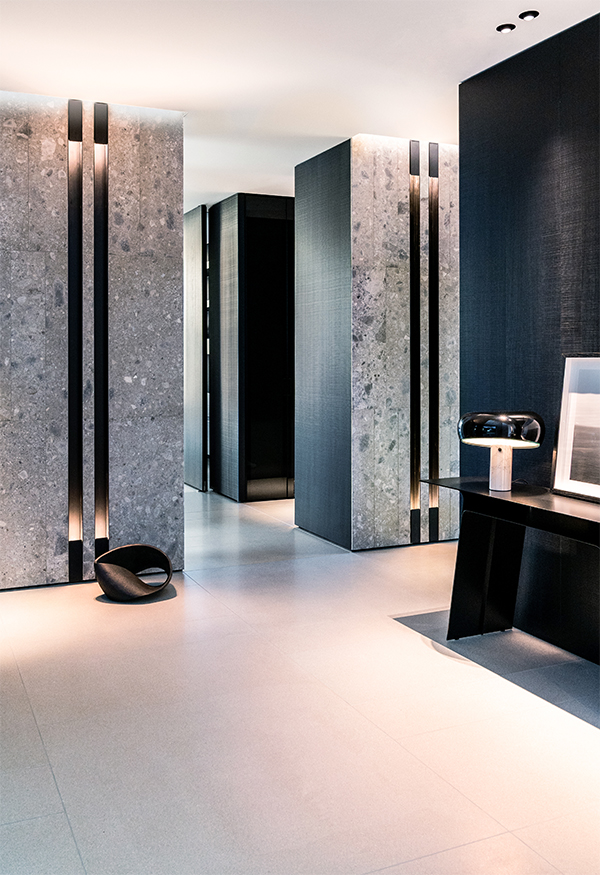 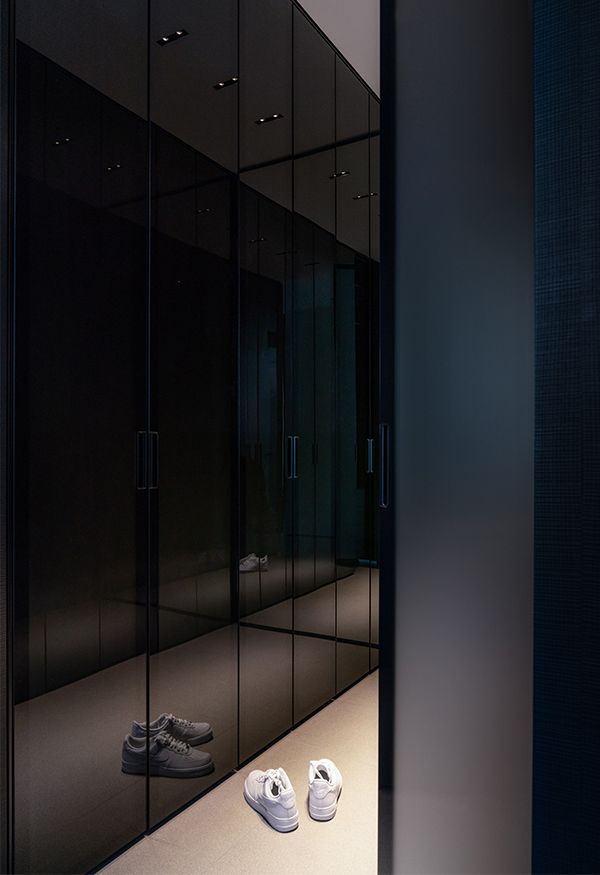 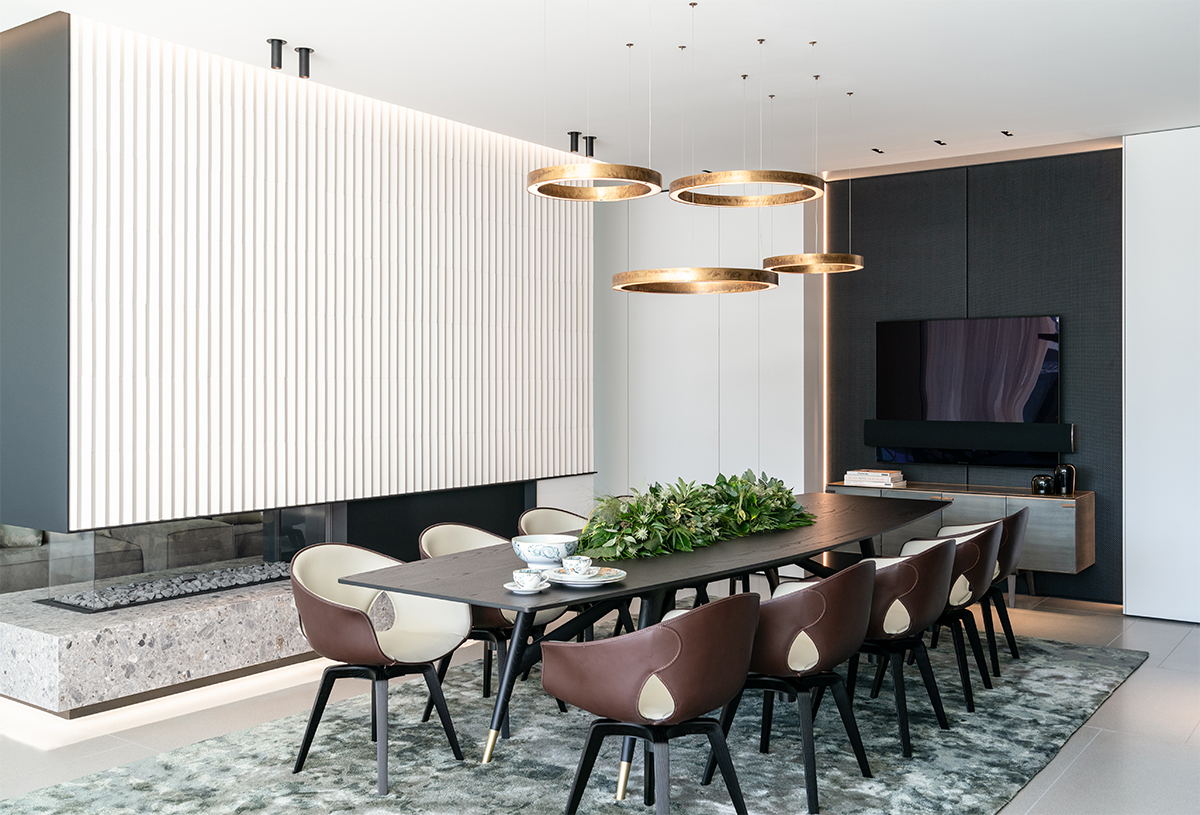 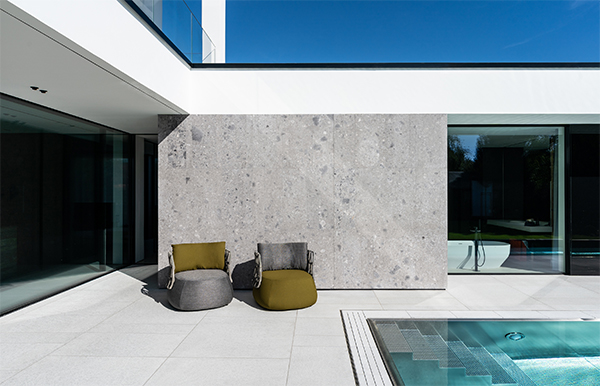 "The Architecture does not play the main role, it forms the framework." 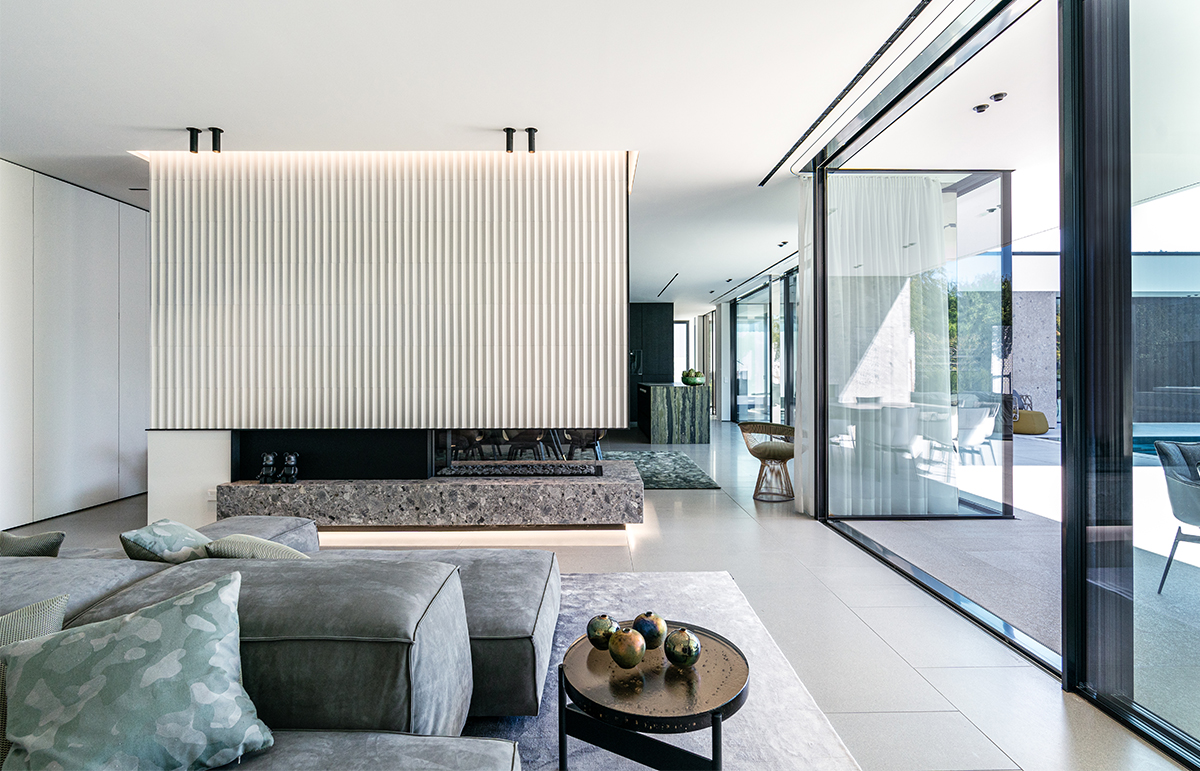 Another room-dividing highlight is the fireplace, - a contemporary interpretation of a tiled stove - for whose covering relief tiles by the designers Ronan and Erwan Bouroullec from the manufacturer Mutina were used.

According to the guiding principle "less is more", the whole interior follows a reduced and at the same time high-quality material language. A recurrent design element is the natural stone Verde Bamboo, whose color reminds of the impressionistic water lilies of Monet. Used both for the kitchen block and for the pool wall, the stone creates a connection between the interior and exterior. Also the natural stone Ceppo di Gré is used continuously - therefore its color scheme is inspiration for the individually designed carpets of the project. The "black line" as a recurring design element can be found both in the floor joints, in the window frames and in the lighting system. This style element creates a three-dimensional relationship between the levels, but also within the spaces, which adds dynamism to the overall design concept. 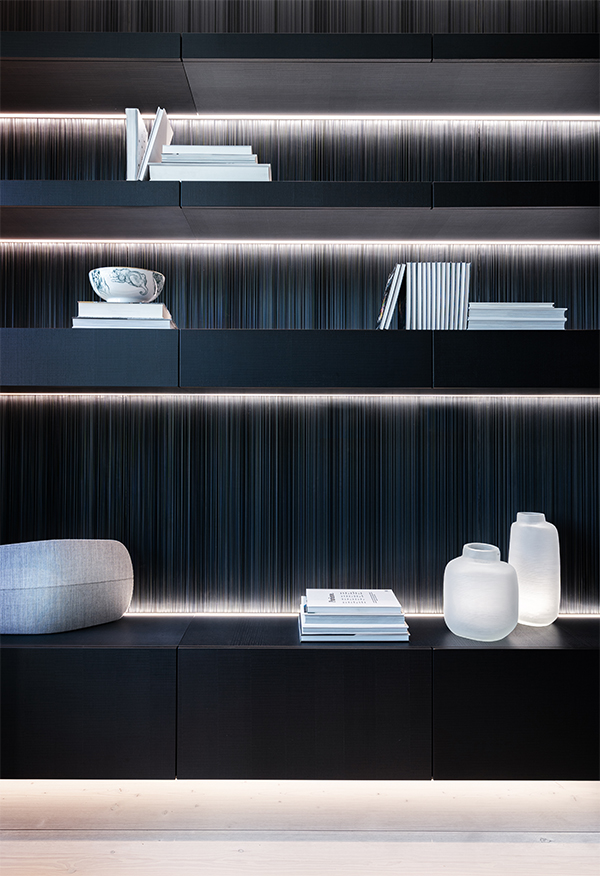 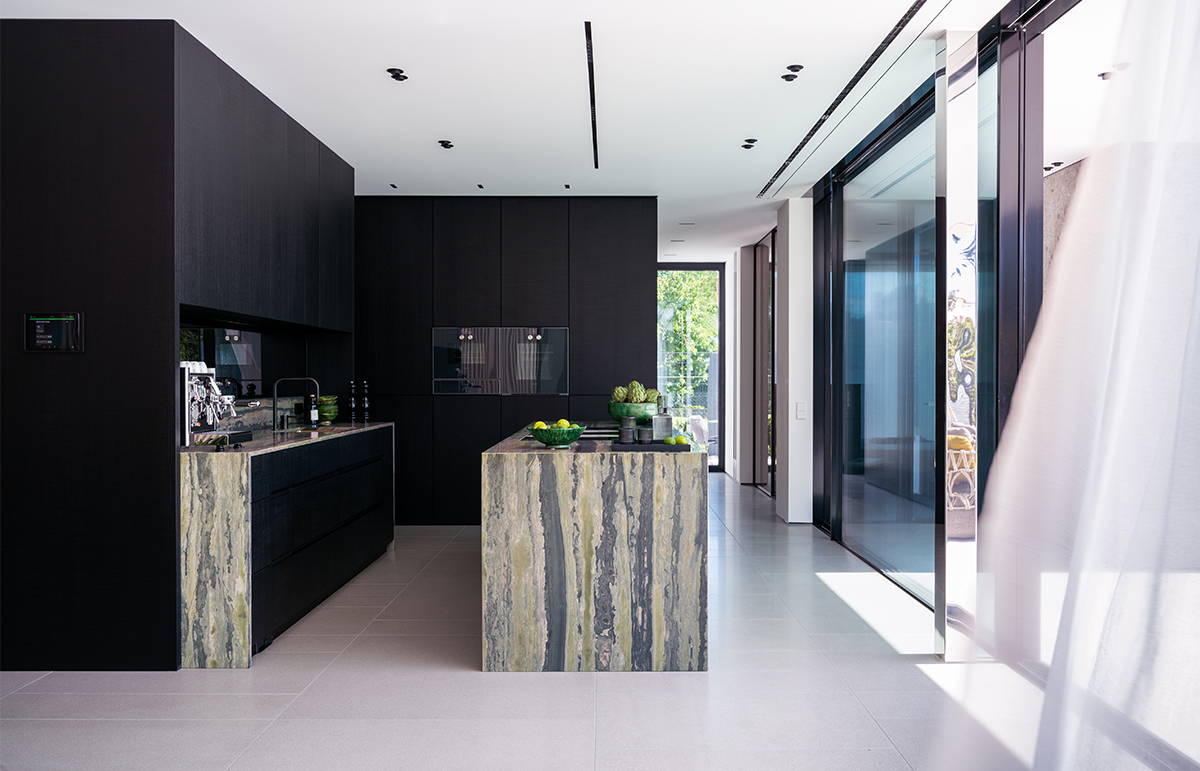 The kitchen island is the central element in the house around which the individual living areas are arranged. Only natural stone walls, floor-to-ceiling boxes made from black sawn-ash wood and enamelled glass visually separate the rooms. 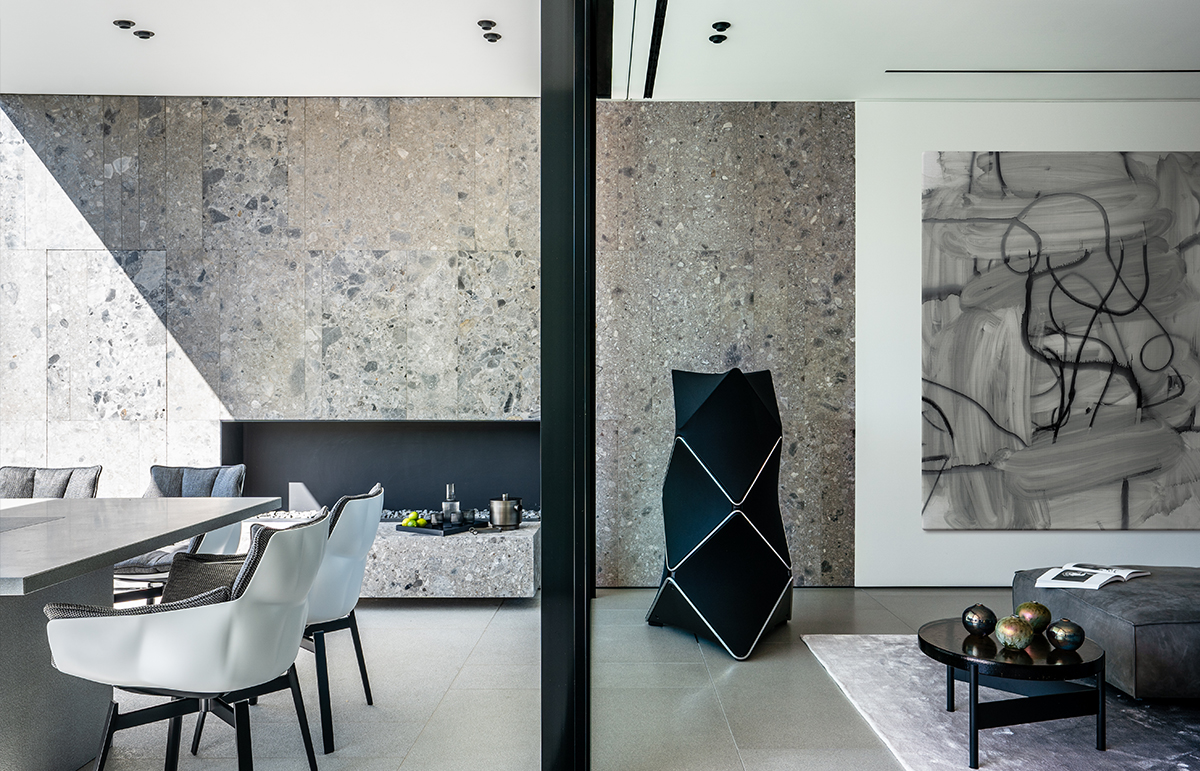 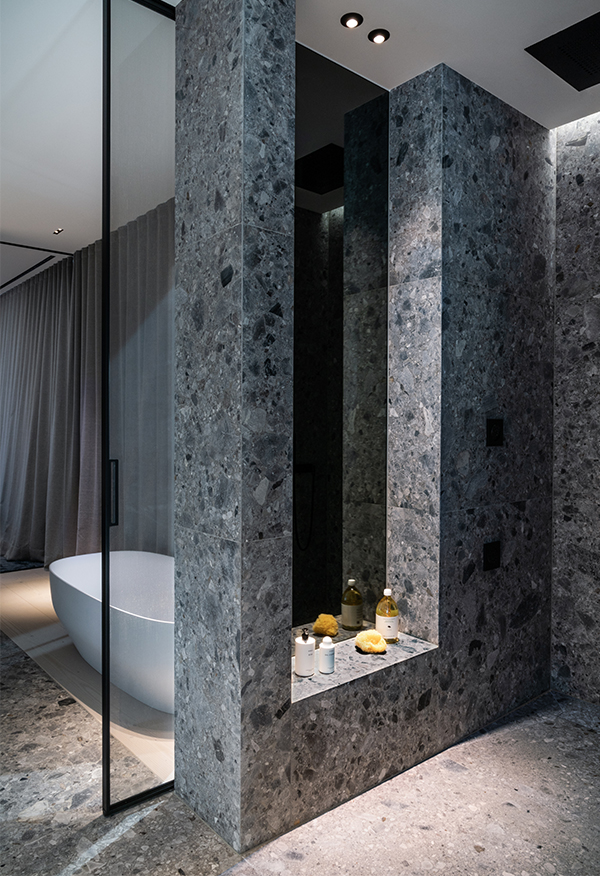 „Light and dark contrasts give the stone-grey texture.“ 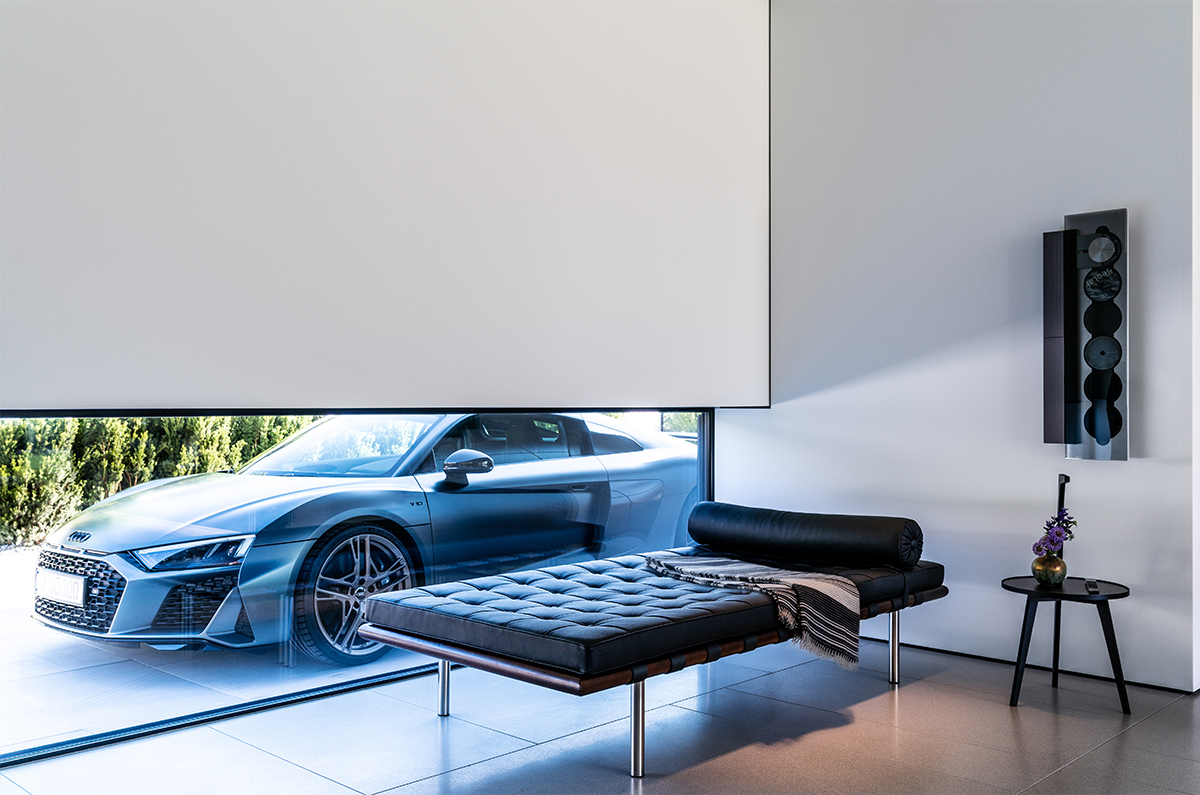