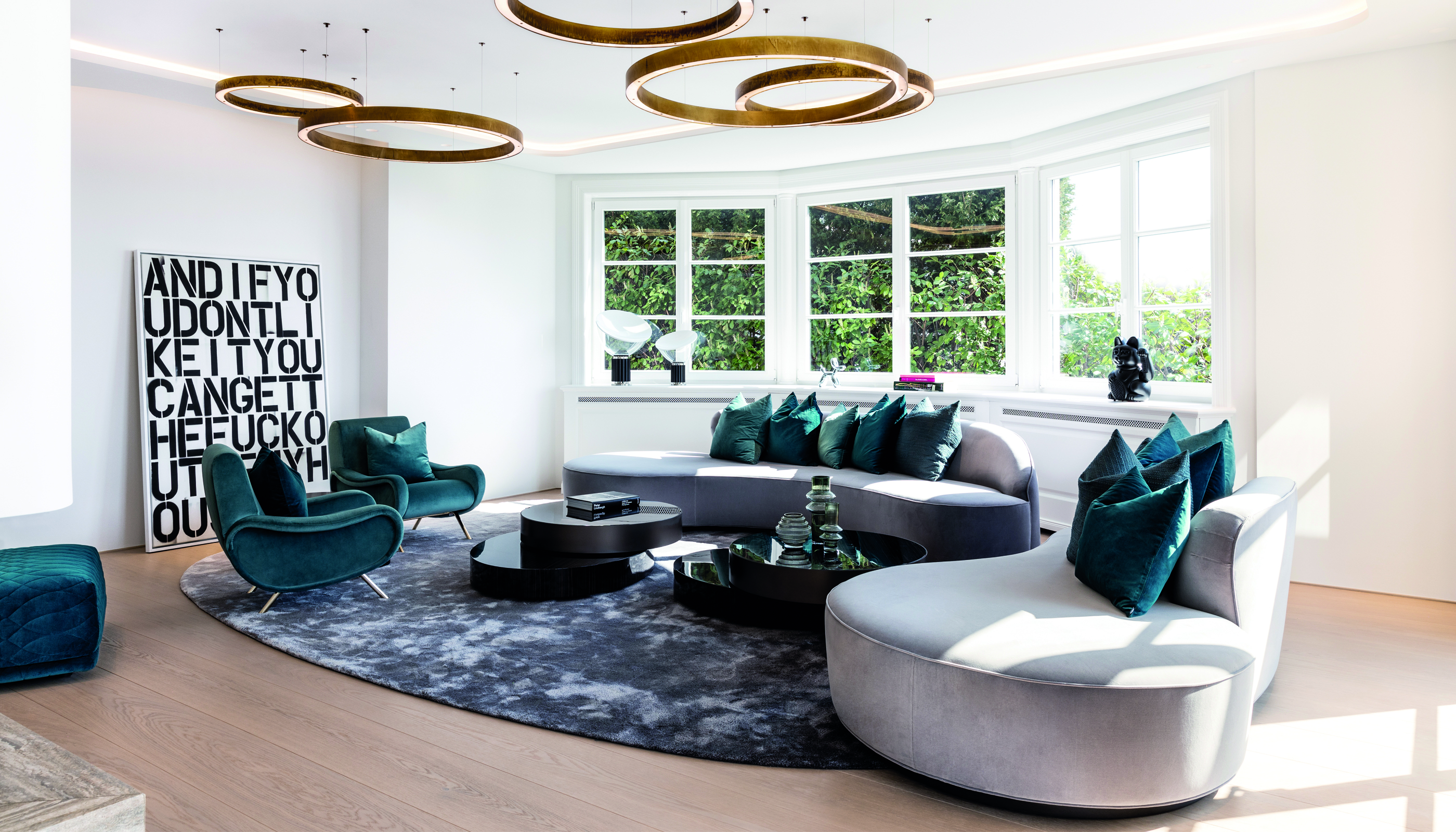 Mid-century modern style with a touch of Nordic minimalism – this central design concept has shaped the interior of the private residence Elbchaussee. High ceilings, room length floor boards made of knot-free oak and floor-to-ceiling windows lend the rooms a spacious appearance and create a Scandinavian vibe. This in turn contrasts prominent design classics of the mid-century modern style: the curvy shaped sofa by Vladimir Kagan for example or the armchairs in petrol blue by Gio Ponti and Marco Zanuso. Distinctive lines, soft organic curves but also geometric shapes are typical for the fifties style. Examples for those stylistic elements are the elliptical coffee table by Minotti or the dining table base with its flowing lamellar structure made of natural stone. Chairs from the furniture collection by Warren Platner for Knoll create a unique architectonic play between the inside and outside and add an interesting touch to the dining area. Geometric shapes can be found in the kitchen, where the kitchen island is optically divided into two: One half is covered with massive wooden round bars made of American walnut, the working surface of the other half is made of Iranian travertine titanium. The stone is also used for the counter of the kitchen island and as a covering of the washbasin. The design of the kitchen reveals a constant interplay of the contrasting materials wood and stone. In the flooring, this theme is revived as well: Jura limestone touches oak floorboards.

Flowing lines and organic shapes are not only typical for the mid-century modern style, they also create an association to the element water, another motif of the interior concept. With its location directly at the Elbchaussee, the private residence has a direct view to the waterside and the harbour. But also, the clients, which are owners of a shipping company, signalled their desire to create a reference to this motif. The cabinet casings in the kitchen take up on it: micro wire, embedded in glass, reminds of the gleaming water surface of the Elbe and creates an optic room extension with its reflections. The organic shapes of the fireplace made of gypsum are an homage to the waves of the sea. The colour scheme of the mid-century modern style varies between neutral tones and daring colour statements. Latter are found in the individually designed carpet in the dining area. By using the carving technique, a relief structure was formed resembling a topographic map. Rusty brown shades, grey and petrol blue tones blend into each other and intensify the three-dimensional effect. The colours in the carpet are repeated in the rectangle pendants by Bocci used in the entrance. The elaborately planned technical lighting in cooperation with Kreon accentuates the design classics and creates a bright and pleasant atmosphere.

The interior of the private residence Elbchaussee is an interesting interplay of loud retro influences paired with Nordic reservedness. Individually customised production and love for details attracts the viewer’s attention repeatedly and is the unique attribute of Reimann Architecture. 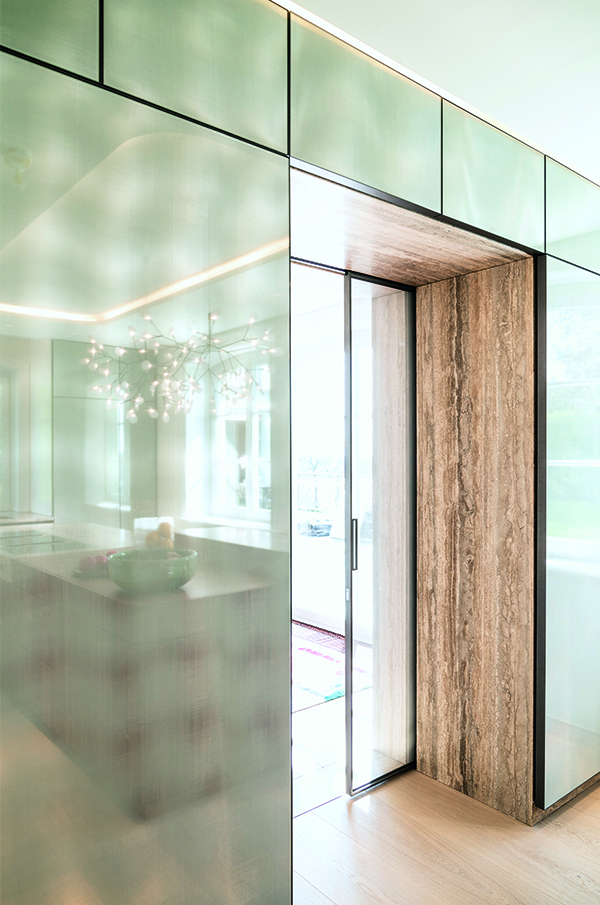 "Micro wire, embedded in glass, reminds of the gleaming water surface of the Elbe." 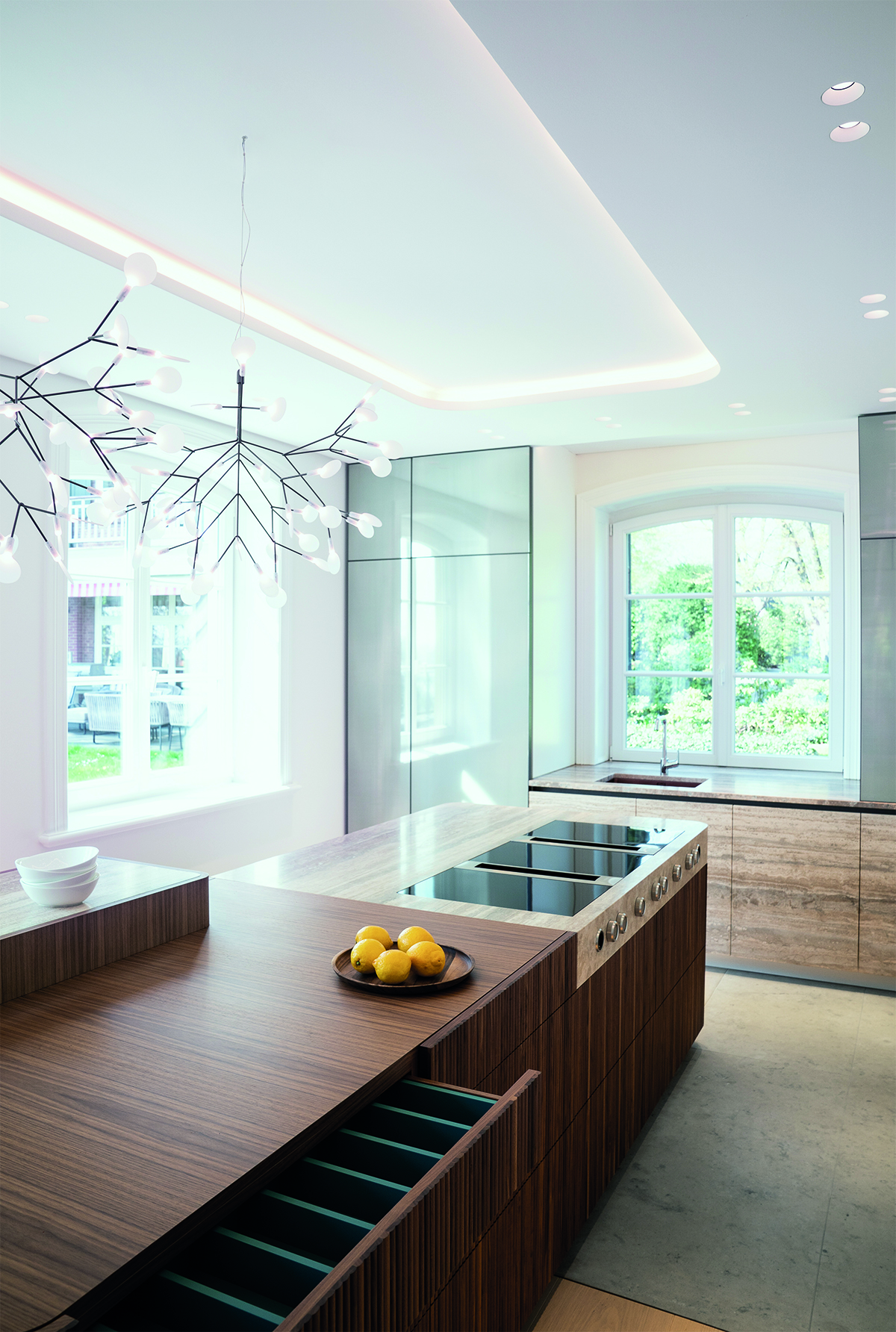 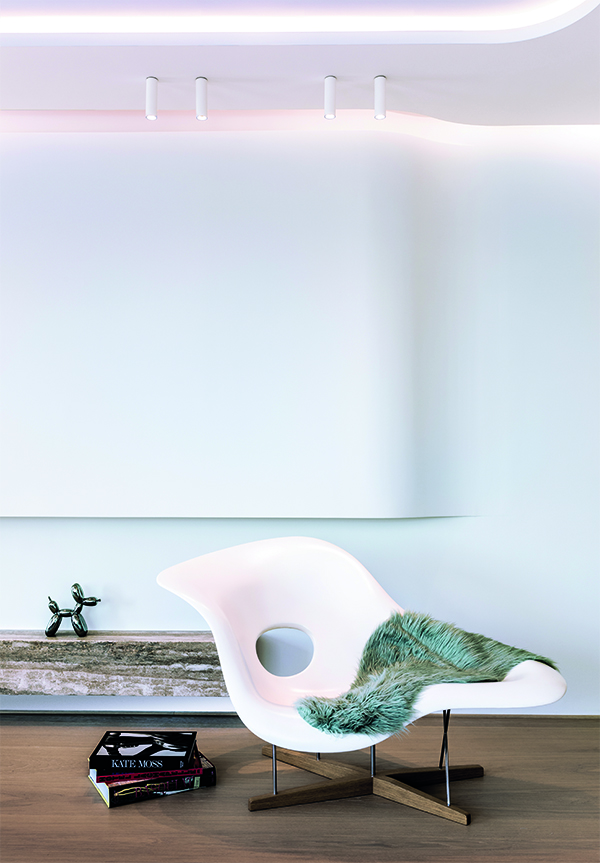 "The lounge chair “La Chaise” by Charles and Ray Eames becomes an eye catcher in the minimalistic living area." 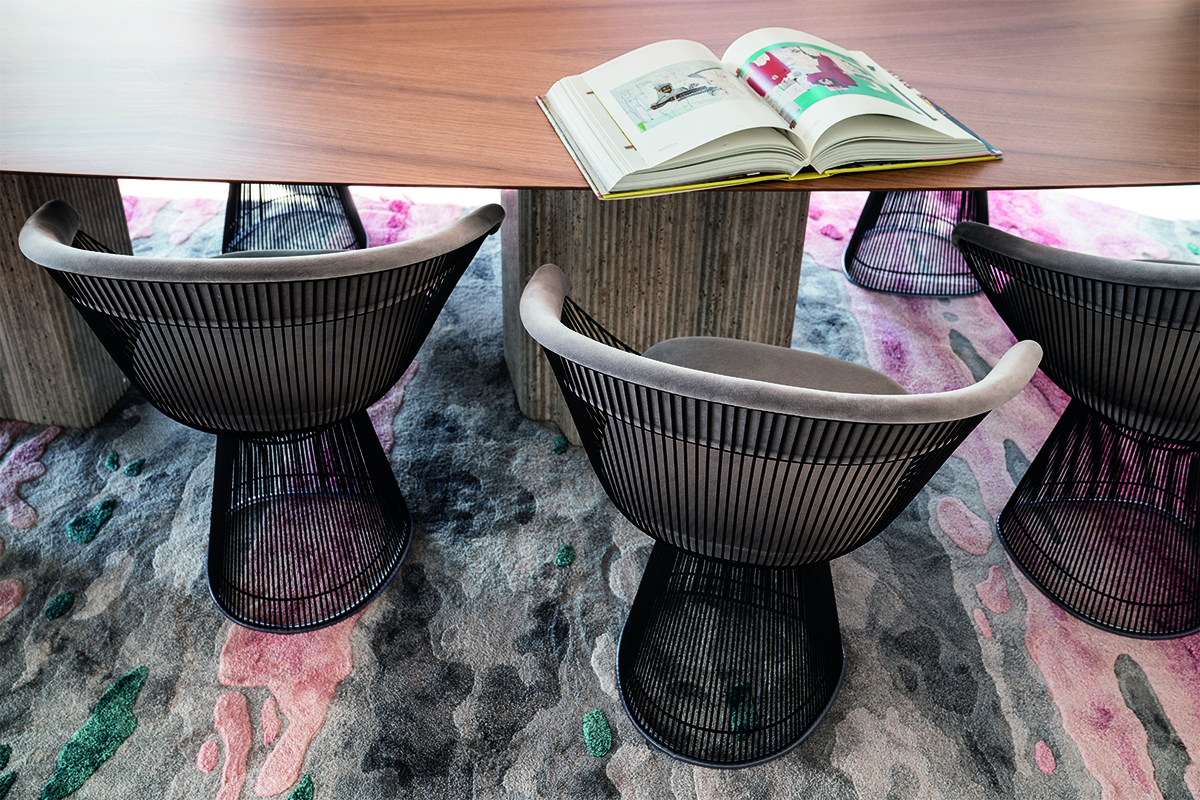 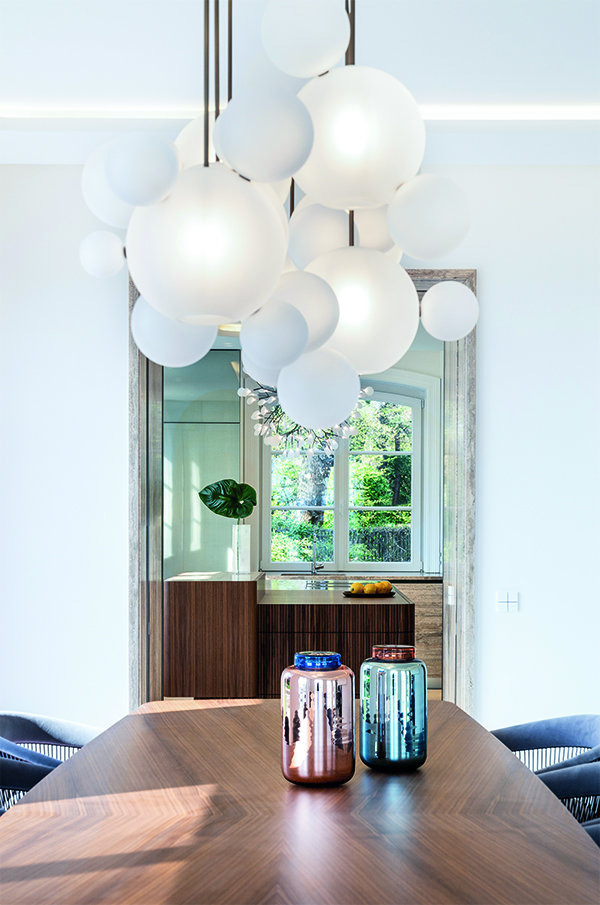 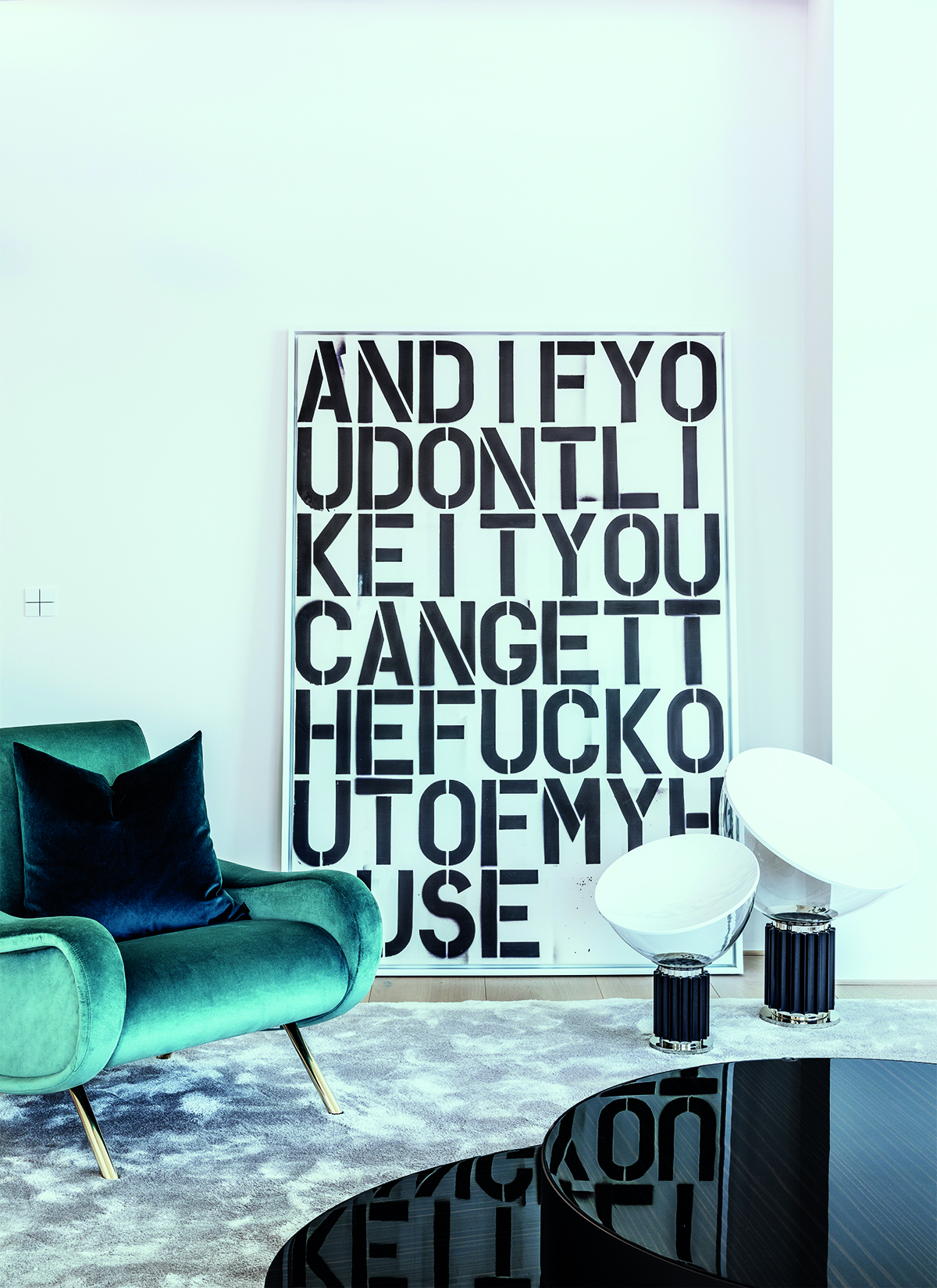